No no it wasnt someone very famous that I should be waxing eloquent about like Julie Powell did in her blogs. They were K's technical manager and one of his teamies with family. We had been meaning to call them since a pretty long time. And finally things worked good and our routines coincided for us to meet up. The time was set-Saturday night!

We had an elaborate menu planned -  matar paneer(a dish that K loves and mandates that I cook when someone comes since the calorie content of the dish doesnt permit his conscience to have it on normal days), stuffed puris,onion and mint rice, lady's finger in curd and gajar ka halwa for desset. We had an awful lot of shopping to be done for this. We had decided to get started on friday, but a torrential downpour prevented us from doing it.

Saturday morning we rose early to get started. First was a trip to the nearby 'Asian' store to get most of the stuff. After a humongous purchase we realised that we had not been able to manage the carrots,peas and milk. We took the trudge to the departmental store which was on the opposite direction. On the way we decided to finish some bank chores and also sneak a peak in the library. Now how can one manage to sneak a 'peak' in a lib!!! We ended up spending one and a half hour there. Finally with all the shopping done,we came back home all famished. By luck, I had cooked a huge quantity of rice the previous day,so lunch was old south Indian style curd rice. The acute hunger made the curd rice taste even more divine! :)

It was 1400 hours by the time I got to making the first dish matar paneer and K got started with separating the mint leaves. One dish down after 45 mins, I prepared the lady's finger while K was busy grating the stubborn carrots. It was close to 1640 when the ladys finger dish was ready and looked little in quantity for 6 people.K was of the opinion that he should get some more of the vegetable while I was in utter panic mode :S. There was the rice, the dessert and the puris to go and I would need to rework (damn office lingo) on the lady's fingers (a funny name for a vegetable if you think about it) again!!!!!!!!! So rather than being cool headed and discussing and deciding on a good course of action, like most couples we got into a fight(My stance being I would make dal as another dish, K being the lady's finger is a tasty dish and deserves to be more in quantity)  We continued our spat while I kept slow killing the carrots in ghee and the rice cooked oblivious of the domestic cauldron. Finally the smell of the halwa which was close to something to die for (how humble can I be eh? ) distracted us. Now K is a person who likes his halwa just the right sweet and he does nt know what is right sweet. Huh. And when I gave him a spoonful of it, he was like 'Mu this IS perfect, you should make this again'. When K says one should cook the dish again, that means he really likes it.(He is such a sweetu he never ever criticises a dish unless it completely lacks chillies :P) Phew!fight over thanks to the carrots and the bill was passed for chane ka dal being the addendum.

I was yet to take a shower and the clock was ticking towards 1730. I made the dough for puris, fried the stuffing and scooted. We were all set, but around 1915 when the dal was yet to get started with I did it again! I panicked yet again! The puris rolling started getting all messy. Thats when K stepped in to save the day, and rolled one Perfect Puri. Then there was no stopping him as he rolled and fried all the remaining 10 puris in a jiffy! How I love my man :D. I made dal in the meanwhile and we were all good to go exactly at 1950.

The guests came in at 2015, and after the usual starting problems with everyone staring at everyone's face, we jumped on the food. But one of the couples had an 18 month old hyper active toddler who was draining them off their energies with her antics and the other couple had a 7 month old baby who was sleeping but had drained them off their energies. So there we were guarding the lil kid and K and I were nearly running around with our plates. We wrapped up dinner real quick. And there was so much to spare. :( Once the guests left, I was like, maybe the dishes did nt come good enough. K said,comeon, God heard my prayers,I wanted more for me!(K can be very greedy when it comes to food and I am on seventh heaven when he likes my food. Baaki duniya jaaye tel lene :P). I was utterly at a loss, that how would we ever finish those gigantic portions  of food. On the Sunday when we finished the halwa, we counted one down :). There were many more to go. Finally on Tuesday evening we had finally cleared of the remains of the Saturday :)

The dinner might have been a fiasco but pulling it off with K was such fun. He was the sweetest person on earth that day being at my beck and call. We should do it again sometime soon:).
Will leave  with a pic of the halwa :) 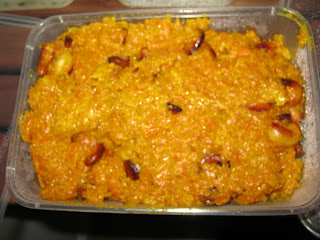