And I am waiting for a next one already.
No matter where I am festivals pep me up. I am at my chirpiest best and can somehow feel the gigantic vibes of good will allll around. Call me silly. But thats just me :)

This Diwali was no less special. The sun shone splendidly! In October having the sun shimmer down tireless in the land where the sun never rises is awesome. The morning was spent in quickly catching up with friends. K wanted to whet his feeling of nostalgia and asked a couple of friends to go closer to the bursting crackers so that he could savor the sound of them. He was in no mood to work and said he had spent most of the day making calls or chatting with colleagues. The British counterparts did bring up some sweets and savories which were matched by the Indian colleagues. There was a lot of munching and grubbing going on which added to the festive splendor.

Amma was in full throttle and had started making sweets 2 days prior to the event. There was besan barfi and coconut laddus to be savored. She also make some kheer on the day of Diwali. I had plans for kachori and chole for dinner. Once K was back, he got on with helping me in getting stuffs in order and lighting up the candles as Amma made a trip to the local temple with some neighbors.

I had called over a colleague of K's who has turned out to be a bit pally with me. Once she came over, she too helped me with bits of the cooking. While we were engrossed in dishing out the food, the heat of the candles and the cooking did make the fire alarm go off. But after some time when I suddenly turned to see the diyas, I noticed one of them burning with a big flame. And within the blink of an eye, it spluttered and another one started burning with a big flame. K was playing some computer games, and I thought it might be better to handle the situation silently. And I poured some water over the candles. It resulted in a conflagration! (I read up later in the internet that one should not try to extinguish a wax fire with water. And more over, the flames were getting bigger because there was some melted wax too which was catching fire) Now this caught the attention of K even though he was engrossed in a game. He came rushing and doused the fire by putting a thick towel over the candles. Then he gave me a look - which said - Woman you had nearly set the house on fire. Since we had a guest at hand, he spared me the sound hearing which came lashing down as soon as she stepped out. The judgement was passed that there would be no candles going forward and I either had to manage with some sort of electrical lighting or ask some one from India to get some authentic diyas for any occasion I wanted to light up things. All said and done we had a happy and safe Diwali. Wish everyone else too had an amazing time! 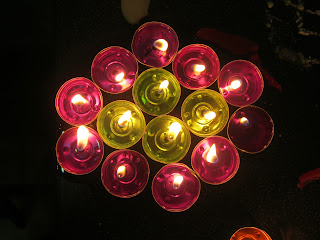 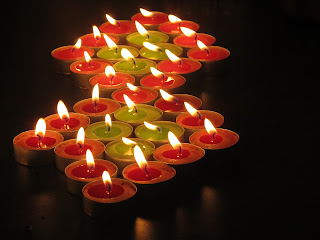 The festival of lights done for this year, waiting for another gorgeous one!
at October 28, 2011 3 comments:

Life has gotten me to a stage