There is a first time for everything

So as I said I started swimming to try to lose those piling pounds. I try to make it 3 times a week. So yesterday I went in the right earnest.

I had an early call for which I scooted out of the pool and went for the shower. As I was in there I heard an announcement 'there will be a male staff  in the ladies changing room'. Well... Not to be bothered since I was in the shower and would be able to perfectly avoid the male staff.

Moments later I heard the fire alarm! Oh dear! I thought might be a mistake which would have set off the alarm. Then I heard the announcement ' the fire alarm is in operation. Please evacuate the facility immediately.'

OMG! What now! I was a hurricane of thoughts. Shall I complete the shower? But what if there is a real fire? I won't burn if I am in shower.  What about asphyxiation. As many people  die of it  as from actual burns. With all these critical thoughts, I certainly out of the shower and saw the other ladies walking towards the exit. Many is the same state of un-dress as me.

I thought  of getting dressed. Since I lived close by, I could take a shower back home?  What if someone came in and dragged me out. That would be wayyyy more embarrassing. So I stepped out in the towel. This towel to be precise 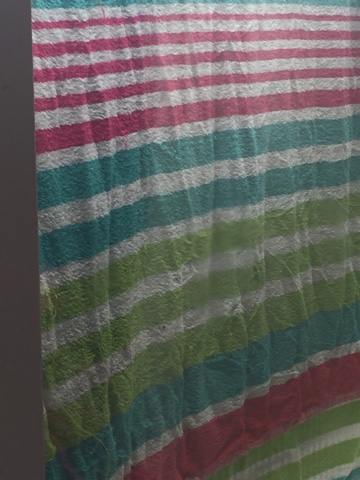 We all stood shivering till everything was reset. We all knew it was a drill. It is always a drill 😉

Yes..only I tend to remember  such b grade bollywood songs.

Email ThisBlogThis!Share to TwitterShare to FacebookShare to Pinterest
Labels: Gen

Everything with Pumpki  has been tinged with a different emotion. A weird sense of 'this is the last time ever'. It is a very funny feeling. Something a 'practical' person like me would be loathe to accept.

As with her birth, I felt I missed out on a normal procedure. I was more than over the moon with a healthy child but I took some time to recover from the sense of missing out. My year of maternity leave with Pumpki  went way faster - being coupled with Chiyaa and her school, trip to India and a change of place. Within the blink of an eye it seemed she was one year old! She was walking, protesting, mimicking us in her own distinctive way. As they say ' she was becoming her own person'.

One point of attachment for her and me was the feeds. She still depended on me. On one hand I was keen for her to get on with solids ( I had heard stories of how weaning got more difficult as the babies got older) but on the other I quite enjoyed the time cradling and feeding her.

Once Amma was here, she took on to feeding her and actively weaning her. With Chiyaa it had been a gradual process since she stopped one feed at a time as she increased her intake of solid food. But Pumpki had never dropped any feeds. So it was quite a drastic measure for both of us. My body was not used to it and neither was she. She protested but gave in slowly. I had some initial discomfort after which my body started getting acclimatised. The first sign of it was the return of the monthly cycles (which I had not missed at all) after one year of sabbatical!

What remained was weaning at night. She was still taking 2-3 feeds at night. We tried all sorts of bottles, waking her, calming her. But nothing worked. It was defcon red for her. She would blow her bugle at full throttle risking Chiyaa 's sleep. I had even more embarrassing stories of babies not weaned at night. I was on a mission to wean her. I took ideas - ranging from the practical one of 'let daddy handle her totally at night ' to the radical one of' apply something distasteful to ward her'. The practical ones did not fall through because smarty pants knew mummy was around. I had to go for radical. Don't judge me but I tried pudin hara to put off feeding. She cried, she wailed. She fought back like a soldier should if it's defcon red :D I felt like it was a loosing battle. I felt I would live to tell embarrassing stories of my own. Each night K and I would have an 'argument' about the approach. Each night was a failure. Till night six, she just took on to the bottle. Just like that. Seven nights ago, it seemed like forever. It seemed outrageous that a 13 month old was still breast feeding. All it took was six nights and I was missing the proximity. All it  took was six nights and my baby was sitting up and having milk from a bottle. All it took was six nights and she was completely weaned.

This time my discomfort was way more. I resorted to sage tea and I will highly recommend it to anyone in my state. The discomfort went in a week. But something  more insidious was happening. Breastfeeding burns calories - upto 500 per day. And this miracle was working without me putting in any effort - well consciously. 2 weeks down the weaning, I noticed a plumper face. I attributed it to 'water retention' ;) whatever it may be women attribute a lot to it ;) But then how long would it last? I stepped on the weighing machine and was not happy. Oh well maybe I was gaining muscle mass and muscles weigh more than fat :D I tried on a pair of trousers since a trip to Leeds was in the offing and boy did they not fit. Ones that used to zip through would not go beyond the hips. Enough said - time to join swimming. Since with Chiyaa everything was gradual, it was a gentle transition all around. With dear Pumpki it has been a bit of shock and awe.

I long holding her at nights, I long to smother her with my kisses and cuddles. As has been with most things around Pumpki, I have given my last feed.